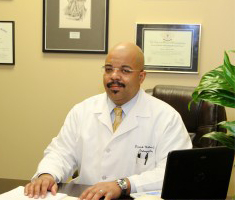 “You can ask my front desk about the pharmacy calls that I used to get asking, what is this, what did you write? I don’t get those calls anymore.”

Dr. Derrick Wallace, M.D. has been around the healthcare block. He’s worked in academics, multi-specialty groups, a single specialty group and a hospital. But all of these healthcare models didn’t work for him. There was only one thing he hadn’t tried: starting a new Otolaryngology practice. In February 2012, autonomy prevailed over fear and Dr. Wallace opened Ear, Nose & Throat Solutions of New Jersey in Nutley. What thwarted his apprehension? Dr. Wallace planned on im­plementing a cloud Otolaryngology EMR system from the get-go.

“I wanted autonomy and to be able to make my own decisions and not have to answer to anyone but my patients. I decided I wanted to start off with an Otolaryngology EMR system. Basically, the main issue for me was cost containment and I did not want to deal with storing charts. I wanted to run a lean, efficient, and modern practice. That meant minimizing the amount of paper and minimizing paper charts. I basically don’t have any paper charts,” said Dr. Wallace.

Cutting Down On Phone Calls

Dr. Wallace also wanted to have an e-prescribing capability so that he could avoid spending time writing prescriptions and answering phone calls from pharmacies questioning his handwritten prescriptions.

“Having an Otolaryngology EMR with e-prescribing certainly cuts down on phone calls. I have terrible handwrit­ing and I know it. My handwriting has always been bad since grade school. It’s the only subject I didn’t do well in,” said Dr. Wallace chuckling. He added, “With an EMR I can go back and I can look at my notes and I can read them. You can ask my front desk about the pharmacy calls that I used to get asking, what is this, what did you write? I don’t get those calls anymore. It’s better for the patients. There’s no question about the prescription when it goes to the pharmacy now.”

If Dr. Wallace wants to prescribe a certain antibiotic and a patient is taking another medication, he can use WRS Otolaryngology EMR to make sure that there isn’t a potential interaction between those medications. Instead of looking up each drug on Hippocrates, he can obtain that information in a matter of seconds. “That is a time saving feature that is built into my Otolaryngology EMR. Patient safety is also improved because of this capability,” commented Dr. Wallace in his testimonial.

A Plethora of Otolaryngology Templates

When it comes to customizing his Otolaryngology templates, Dr. Wallace doesn’t forget to mention in his testimonial that he is as happy as a kid in a candy store. “There’s a variety of ENT templates that are customized for ENT. It allows things to move quickly. There is a customized template for Hearing and Audiogram. When a patient sees my audiologist and then they come to see me I open up the template and I can check off if they have hearing loss, or if the hearing is normal and how their speech discrimination is. It makes the visit a little bit faster in terms of documenting the visit. At the last practice where I worked I dictated everything. Now I just type everything into the EMR. I’ve been thinking about getting WRS Dragon Medical dictation and incorporating that for more complex cases.”

Yet another outstanding WRS feature for a start-up Otolaryngology practice physician like Dr. Wallace is bill­ing revenue cycle management. What doctor in his own practice wouldn’t want to have the ability to track his business collections day or night and from any location?

“It’s easier for me to track things because WRS Billing Team works within my EMR. That’s another feature that I wanted– to be able to track what’s happening. It is more cost effective for me to hire someone to do the billing, but it’s great to have them work with the EMR system so that I can pull up a report while I am at home relaxing and see the status of my collections whenever I want to. I don’t have to call up a billing person to get a report or wait for some report at the end of the month. I can look at it whenever I want to,” stressed Dr. Wallace.

To skeptics who may argue that an EMR slows a physician down, Dr. Wallace countered, “An EMR probably slows you down at the beginning, but once you become efficient in using it over time, an EMR saves you time. I have patients who come from a nursing home. They bring a piece of paper and they want you to write a report. You have to write your own note and then write a note for them to take back to the nursing home. Because they can’t read my handwriting I get a phone call asking, ‘What did the doctor say?’ So now I hand them back that piece of paper and I print out my note. It goes with them and I don’t get any phone calls because they can read my note and see what I did, what transpired with the patient and what my recommendations were. It makes things more efficient—it really cuts down on phone calls.”

The physicians who Dr. Wallace refers his patients to are also reaping benefits from the WRS cloud EMR. “They love it because when the patient is leaving the room I’m faxing the referral note to the physician. He or she knows exactly what is going on with the patient before the patient even leaves my office or as the patient is leaving my office. That’s another thing that was very important to me. It also cuts down on the cost of having to mail every referral. You have to wait a week for the dictation to come back and you have to put it in the mail and that takes another couple of days. It would be two weeks before the referring physician actually knows what transpired between you and his or her patient here. Now that takes seconds,” claimed Dr. Wallace.

Saving money on mounting postage costs is yet another boon to a new practice that has to watch its pennies. “Instead of spending 45 cents for a stamp, my mailing costs are not that high. All of that is wrapped up into the cost of the EMR. You have some people who still want you to mail things, but that is far and few between. I fax everything.”

Emphasizing in his testimonial that he went live with Waiting Room Solutions the first day he opened his practice, Dr. Wallace said, “There are no paper charts here. There are some bumps in the road in terms of figuring things out, but you just figure them out as you do them. We do all of our training via the web. One of the reasons I picked WRS is that it was developed by an otolaryngologist and WRS is always bringing out new improvements.”

Noting that he used NextGen’s EMR at a practice where he had worked, Dr. Wallace said it was cumbersome and difficult to use. “There were really no ENT templates at all. We had to make up our own stuff. The e-prescribing was a little bit more cumbersome,” recalled Dr. Wallace.

GE Healthcare Centricity was another EMR software system that Dr. Wallace evaluated. “When I called to talk to them I was quoted $17,000 to implement a web based EMR system which I thought was outrageous. It was ridiculous. I could see if they were coming and putting in hardware and setting up a server. I didn’t have that money to spend anyway. It could have been the greatest system in the world, but I couldn’t afford it.”

Tools of the EMR Trade

When it comes to implementing an EMR, Dr. Wallace believes that customer service and training is paramount to success. “When we need help, WRS gets back to us promptly. If I want to find something, I can get online whenever I need to. That’s really nice. If I want to understand something, a video or webinar is available too,” said Dr. Wallace in his testimonial.

It may be less than a year since Dr. Wallace opened for business with the WRS Cloud Otolaryngology EMR, but it is already evident that his decision is a win/win situation for his practice and for his patients. “The patients like it. Most of them appreciate new technology and a doctor who is up-to-date and not handing them written prescriptions that they can lose before they get to the pharmacy. Sometimes they go to my front desk and ask for their prescription and you explain that the prescription goes directly to your pharmacy and all you have to do is pick it up and they say, ‘That’s great.’ Patients are very impressed with that. If they need a copy of their note to take to their doctor we print it out and they take it with them. They don’t have to wait a few days to get the note. People appreciate the technology. I run a solo practice with a very small staff. WRS helps me do that,” concluded Dr. Wallace.