Where Did All of the Independent Physicians Go?

It is pretty easy to see that independent physicians are becoming scarcer, but where are all of the doctors going?

According to the 2018 Survey of America’s Physicians, physicians are continuing to flock to hospital employment models rather than take on the challenges of a private, independent practice [1].

Last year, a study conducted by Accenture found that there are about 75,000 fewer independent physicians working in the United States now than there were in the year 2000. Over this same time period, the total number of physicians increased by over 100,000.

In most cases, an independent physician is defined as someone with majority ownership of their practice who has key decision-making rights. We want to extend this beyond just the practice owner, however because physician-owned medical groups are also becoming players in the healthcare business landscape. The 2018 survey showed that medical groups like these employed around 12% of physicians [1]. When a doctor is employed by a group like this, while they are not practice owners or partners, they receive their compensation from other physicians who own the practices by which they are employed and not a hospital system.

It all comes down to this simple fact: the number of independent practice owners (and thus those employed by smaller, practitioner-owned practices) is likely to fall in the near future. The hospital employment model will continue it’s trend toward dominating the industry. In 2018, we can extrapolate that slightly over one-third of doctors (36%) received their pay directly or indirectly from a hospital.

Now, you may be wondering: Why are doctors getting scared off by the challenges of owning their own practice? Are the pressures facing them too great? Can independent practices survive in this evolving medical landscape? 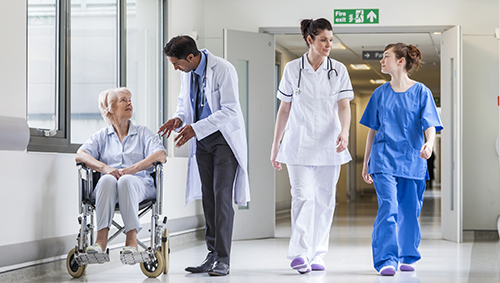 The evident growth in hospital-run medical employment suggests that the younger physicians that are joining the job market prefer the stability and sustainability this arrangement can provide – i.e. less risk. Data backs up this assumption as in the 2018 survey, doctors under 45 years of age were employed by a hospital or hospital-run group 53% of the time, which is drastic when compared to the nearly 29% percent of physicians above age 46.

It seems that the deciding factor in the decision to join a hospital is largely an economic one, as is common for many employees and businesses; particularly because there seems to be a majority consensus that hospital employment can be less rewarding and provide less freedom and more day-to-day stress than private practice. So, if you are wanting to continue pursuing independent practice but are concerned about challenges to turn a profit, it may be tempting to switch paths.

Sadly, it is true that (particularly) without proper management, private practice payment and profit rates can be variable at best. Traditional payment models rely heavily on the number of patients served, and with more competition from big-name hospitals, that can mean relatively significant fluctuations on both a monthly and yearly level. Independent physicians most commonly cite reimbursement or throughput as their biggest concerns with remaining as an independent practice [2]. Plus paperwork and compliance is taking up more time than ever for doctors and staff these days; if you’re an independent physician, trying to both manage a business and provide quality care to patients can take up a lot of time and energy, further reducing functional hourly profits.

This seems to be in sharp contrast with physicians joining hospital or medical groups, on the other hand, who often experience relative financial stability. The math is simple – an efficient staff of hundreds of doctors, nurses and support staff can service a much larger pool of patients,while maintaining a padded profit line that allows it to pay its employees a set salary regularly. This assured income appears to be especially enticing to the younger doctors in the job marketplace. According to a 2015 Merrit Hawkins Survey, 70% of newly trained physicians expressed a preference for an employed setting in their firstpractice situation [3]. Interestingly, 46.4% of physicians surveyed in 2018 reported that the relationship between hospitals and physicians is somewhat or mostly negative.

These conflicting facts are a bit confusing, and yet, they also seem to make sense. We can all recognize that there is a lot to learn – particularly as a new doctor; school is not the same as the “real world” and you can learn a lot at your first job. But it also struck us that this may be related to the increased cost of living and rising cost of education in the US which burdens many young professionals with debt. A guaranteed income with less responsibility beyond patient care is more comforting for someone with large monthly payments to make. People are more likely to make personal fulfillment sacrifices for financial security than take risks.

But can the risk of taking on private practice pay off? Perhaps all of this seems a bit bleak, but never fear! If you’re an independent physician or considering starting your own independent practice, this change also means that there is a lot of upside. You have an opportunity for a unique value proposition to your patients and will have less competition with other private practice. In the right environment and with the right approach, an independent practice can be a personally and financially superior route to follow. Stay tuned for our next blog which will focus on some helpful advice for success as an independent physician, and read our complete downloadable guide for more information.

[1] https://revcycleintelligence.com/news/less-than-a-third-of-docs-owned-independent-practices-in-2018
[2] “The (Independent) Doctor Will NOT See You Now.” Accenture. 2015.
[3] “2016 Survey of America’s Physicians - Practice Patterns and Perspectives.” Merrit Hawkins, on behalf of The Physicians Foundation. 2016.
Share this...